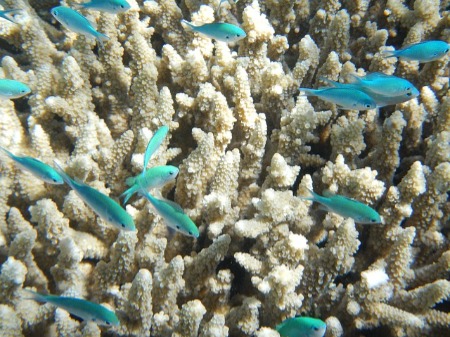 Coral reefs dying at an increasing rate. It’s a potential climate change disaster would be loss of our Coral Reefs.

A study by Langdon et al. (2000) predicts that due to global warming, the world’s coral reefs could be reduced by as much as 40% by the year 2065. The corals secrete calcium carbonate to build the skeletons that form reefs. The reefs themselves are home to an extremely diverse ecosystem, and serve as natural breakwaters, which help to prevent beaches from eroding.

Anthropogenic global warming has also caused an increase in tropical sea surface temperatures. And, this is thought to stimulate coral bleaching. Which is where the coral loses its symbiotic algae, causing mortality.

In 1998 coral reefs around the world suffered the most extensive and severe bleaching on record, creating a high level of coral mortality (Reaser, Pomerance and Thomas, 2000).

This combined with more localised anthropogenic factors could devastate the world’s coral reefs. Even protected areas, and reefs run for sustainable use are affected by global climate change, and their existence threatened.

These two factors, which adversely affect coral reefs, suggest that the effect of climate change on coral reefs may be much greater than at the levels previously predicted.

“Although sea levels have been monitored since the early 20th century, it wasn’t known how many changes were related to land movement. Now satellites can provide such information.

The most likely factor for sea level rise is changes in the Earth’s ice cover. NASA said three-fourths of the planet’s freshwater is stored in glaciers and ice sheets — or about 220 feet (67 meters) of sea level.”

Climate change is the greatest global threat to coral reef ecosystems. Scientific evidence now clearly indicates that the Earth’s atmosphere and ocean are warming, and that these changes are primarily due to greenhouse gases derived from human activities.

As temperatures rise, mass coral bleaching events and infectious disease outbreaks are becoming more frequent. Additionally, carbon dioxide absorbed into the ocean from the atmosphere has already begun to reduce calcification rates. This slows down reef-building organisms and reef-associated organisms. It does this by altering seawater chemistry through decreases in pH. This process is called ocean acidification. via oceanservice.noaa.gov

The UN warning accompanies an increasingly frequent round of sobering news about ecosystem failures.

Zooxanthellae, the tiny organisms that give coral reefs their vibrant colours, are emigrating from their hosts in massive numbers as oceans heat up, killing themselves and the coral they leave behind – a process known as coral bleaching. via www.worldwatch.org

A study earlier this year in the Proceedings of the National Academies of Science said the current extinction period, may be the greatest event in the Earth’s history. It is known as the Holocene extinction event, and is the first due to human actions. Unlike previous events, however, extinctions are happening over the course of decades rather than centuries.

Recent studies suggest that a quarter of the world’s species may go extinct by 2050. Coral reefs dying is just one of the worst examples.

The UN warning accompanies an increasingly frequent round of sobering news about ecosystem failures.

Zooxanthellae, the tiny organisms that give coral reefs their vibrant colors, are emigrating from their hosts in massive numbers as oceans heat up, killing themselves and the coral they leave behind – a process known as coral bleaching [but to most people this would be seen simply as coral reefs dying] . via www.worldwatch.org

Loss of Coral in the Florida Keys Today

Corals live precarious lives: pollution is choking them out, careless boating is breaking them up, and climate change is warming and acidifying their habitats, killing off the algae that bring them to life. Hurricanes, like the one currently barrelling toward the Keys, also don’t tend to do them any favours.) If you’re used to reading coral studies, which regularly describe 75 percent declines in live coral over mere decades, a 52% loss over centuries might not seem so bad.

“The Coral Has Simply Gone Compeletely”

But McClenachan is quick to point out that this study is diagnosing a completely different category of disappearance: this 52% loss happened so completely, we no longer even look for coral in those places, because we don’t remember that it was ever there.

“It’s not a decline in live coral,” says McClenachan. “It’s the entire loss of those reefs.” via www.atlasobscura.com 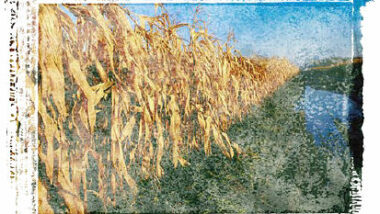