The IPCC graph of global temperatures shows current temperatures to be the highest, but a number of scientists dispute this. Soon and Baliunas (1993) using studies of tree rings, and other indicators of past climate claimed, that the 20th century is probably not the warmest nor a uniquely extreme climatic period of the last millennium”. This study was used by sceptics including the Bush administration in the argument against capping CO2 emissions in the US. The papers conclusion even made its way into an Environmental Protection Agency report made by the White House. The findings contradict widely cited and highly thought upon research by other scientists (Regalado 2003). Michael E. Mann of the university of Virginia was one of the many climate change experts who criticised the Soon and Baliunas (2003) paper. Dr Mann led a climate change study back in 1998, producing a reconstruction of global temperatures that showed a distinct pattern of temperature, which had stayed level for centuries, then upturned in the last few decades producing a “hockey stick” graph (see fig 2.1).

The study concluded that greenhouse gases were the main factor contributing to climate variability during the 20th century, and that mean annual temperatures were at their highest since at least AD 1400. Natural factors alone cannot explain the anomalous warmth and therefore, anthropogenic climate change must have a significant effect on climate (Mann, Bradley and Hughes 1998). Dr Mann and his colleagues produced a critique of the Soon and Baliunas (2003) paper saying that the claims made were not consistent with the scientific evidence, and that the paper was flawed. The response details a number of additional reconstructions (Mann et al., 1999; Jones et al., 1998; Crowley and Lowery, 2000), that also support the conclusion that late 20th Century temperatures are the highest experienced in the last 1000 years (Mann et al 2003). 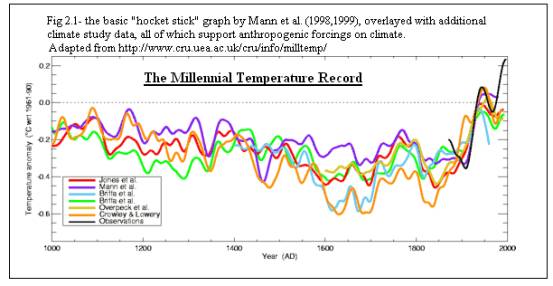 fig21-millenial-temp-record
When examining climate change there is a very distinct difference between regional temperature anomalies and hemispheric mean temperature anomalies. Regional weather causes certain areas to cool while others warm, making hemispheric mean temperature a more valid and stable measurement than regional temperatures (Mann et al 2003). Consequently making the Soon and Baliunas (2003) paper inaccurate, which lead people to question whether the paper should have ever been published. It has been reported that after the publishing of the paper in Climate Research the journals editor-in-chief resigned because he was not allowed by the journals owners to publish an editorial in a following issue pointing out the articles flaws. A further revelation was that the American Petroleum Institute partly funded the study, which was then promoted by non-profit organisations that receive support from energy companies e.g. Exxon Mobil Corp. This suggests that there may have been an agenda behind the study, designed to benefit its supporters, possibly using the data to fit in with their existing opinions on anthropogenic climate change. 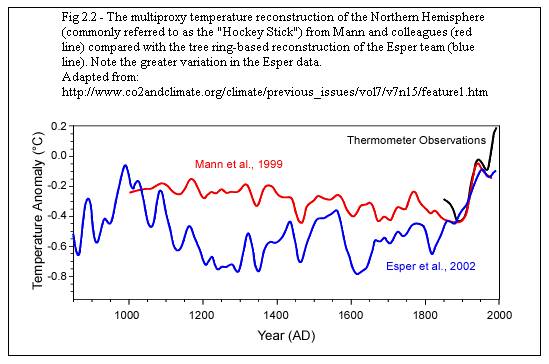 The problem with the method used for Mann’s “hockey stick” graph (see fig 2.1) is that reliable temperature measurements made using thermometers only go back approximately 150 years. Without this data being available studies have to rely on a collection of structures that respond to temperature, and were around at the time in question. These are known as temperature proxies, and include tree rings (as used by Briffa (2000)), coral reefs and ice cores. The accuracy of this method is a source of much debate by scientists. Critics of the “hockey stick” claim that the method does not represent the full amount of temperature variation that has occurred in the past. The original graph by Mann et al. (1998) does not show the Medieval Warm Period or the subsequent Little Ice Age. Supporters of the hockey stick graph have argued that both the Medieval Warm Period and the Little Ice Age were not global phenomena, therefore do not show up in global temperature data. The debate has lead to a further temperature reconstruction of the northern hemisphere to be produced, which shows both the Medieval Warm Period and the Little Ice Ages clearly (see fig 2.2).

This reconstruction like Mann et al’s (1999) shows a steady increase in temperature during the 20th century but indicates that the warming started earlier in 1800. From this version of the temperature proxies it appears that temperatures were as warm 1000 years ago as they are today. Also that warming has occurred at a similar rate in the past, as it appears to be doing so in the present e.g. from 900 to 1000 (Esper et al., 2002). This study suggests that the temperature rise being experienced in the 20th century may not be that unusual, and may have natural causes rather than an anthropogenic forcing.

During the last century, however, the climate has been changing more rapidly.

Sea level has risen about four to ten inches in the last century.

Increases in global temperatures over the last century correspond with increased industrialization.

Is Climate Change happening?
Global Warming and the Alternative Theories